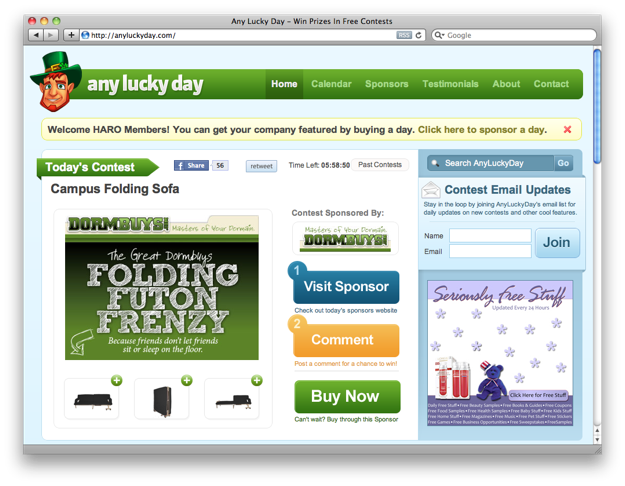 After figuring this out, Giancarlo promoted 110 companies throughout 2009 (including Flip Video, Keurig, Griffin Technology) and gave away over $13,000 of their products/services. He built up an audience and established credibility to his site.

In December 2009, he began selling days to companies for the 2010 year. Each day costs $1.50 more than the previous day. January 1st was $1.50 and January 2nd was $3.00. January was completely sold out before the New Year, and by mid-January, he had sold out through February 12th. He then decided to advertise on Peter Shankman’s HARO, a daily newsletter that goes out to hundreds of thousands of people and businesses. As a result, he is now sold out until April.

What keeps people coming back? Everyday he promotes a new company to his audience and gives away a new product or service. The curiosity of what company he is promoting and what he is giving away everyday allows for his audience to grow. Through hard work and dedication over the past year, he managed to turn a hobby of giving away things for free, into a business.

His HARO ad is after the jump.

Does your company sell a product or service? Go to http://AnyLuckyDay.com and buy a day to have Giancarlo Massaro promote your company. Each day a company gives away one their products or services, and Giancarlo promotes it through a contest where thousands enter to win. In 2009 he worked with over 110 companies (Flip Video, Keurig, Peek Mobile, Griffin Technology to name a few) and gave away over $13,000 in products/services. This year he is selling every single day to companies using a calendar-based model where each day increases by $1.50. January is sold out, and there are only 15 days left for sale in February. HARO SPECIAL: If you refer a company that sells a product or service and they buy a day, Giancarlo will pay you 50% of that days selling price. If you want more information you can call Giancarlo directly at 203.314.7181, email him at [email protected] or follow him on twitter @anyluckyday. Buy a day now: http://anyluckyday.com/calendar – Prices good till January 31st!