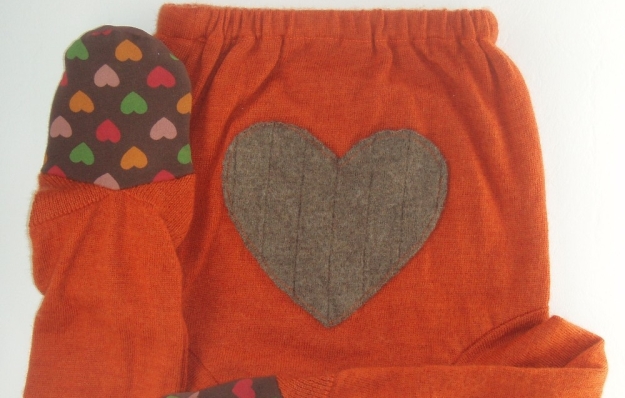 Not long after beginning her adventure as a new mom, Sarah Eddy made a bold move for the sake of the environment.

She switched to cloth diapers.

“It’s not as icky as some people think it is,” Eddy said.

After experimenting with various cloth diaper brands and styles, the 2005 Grand Valley State University grad ended up at her sewing machine making appliquÃ©d diaper covers called “woolies” out of the softest wool sweaters she could find. These woolies are worn over cloth diapers and come in a range of styles including brieflike “soakers,” capri-length “shorties,” full-length “longies” and even “footies” that cover the child from waist to toe.

Each pair has a darling felted wool appliquÃ© on the rear. The most popular designs include “royal buns” featuring a crown appliquÃ© and “eco-buns” featuring the reduce, reuse, recycle symbol. The biohazard symbol and skeleton appliquÃ© with heart shaped eyes are popular, too.

“I try to have fun with it,” Eddy said, smiling.

The great part is that “woolies” can be worn over disposable diapers, so you don’t need to commit to cloth to add them to your child’s wardrobe.

Eddy made the first few pairs of woolies for her daughter Elizabeth, now 21 months, to wear over her cloth diapers. But before Eddy knew it, she was filling out paperwork to register her handmade business, Chickadee & Me.

Prices range from about $16 to $32 depending on the style. Custom orders are an additional $5.

Image from Chickadee & Me