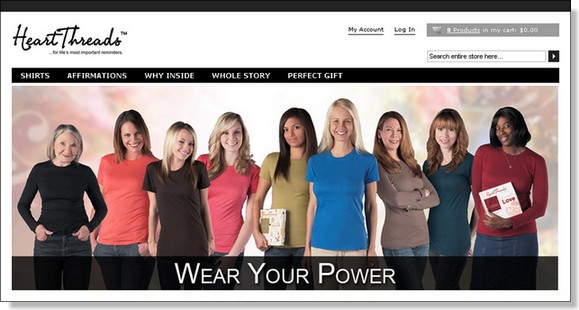 When the daughter of a good friend passed away in 2008, entrepreneur Scott Wilson could have sent flowers, instead he paid tribute in his own way, doing what knows best — making t-shirts.

A clothing manufacturer in San Marcos, CA for more than 30 years, Wilson screen-printed a photo of his friend’s daughter on the inside of t-shirts so the family could take comfort in keeping her close to their hearts, according to a story at WalletPop.

Today, a year and a half later, what began as a thoughtful gesture has taken on a life and mission of its own. Wilson’s newest venture, HeartThreads, a line of women’s t-shirts with inspirational quotes printed on the inside has become a reality. The question is, will people pay for something no one else can see? It’s sort of like getting a discreet tattoo — without the needles! Or wearing sexy lingerie under a no-nonsense business suit. Will women be flashing their, um, messages?

Launched a little over a month ago, HeartThreads offers long-sleeve and short sleeve t-shirts designed in soft, pima cotton featuring four motivational themes: wisdom, faith, love, and inspiration. Messages such as “Karma: What goes around comes around. I will live my life with integrity and purpose,” and “Live, love, laugh: words to live by. Live with purpose, love unconditionally, laugh out loud, I’ll enjoy life every step of the way…” are two options.

Wilson said in an interview that he has been approached by companies such as Hallmark, who are interested in retailing the shirts. “I’m torn about whether I want to take it to a bigger arena, or keep it exclusive,” says Wilson, “this was not conceived as a money-making venture … it’s a completely different thought process.”