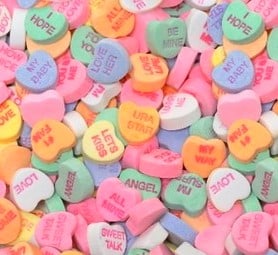 This Valentine’s Day will see a romance blossom between two passionate lovers of brevity: the Sweetheart candy maker and Twitter, according to a story in The Tampa Tribune.

A select few candy hearts will proclaim, “Tweet Me.”

The Twitter-Sweetheart project seemed almost predestined, executives with the candy company say, with Twitter transmitting billions of ever-so-brief 140-character messages around the globe, and Sweetheart limited to amorous overtures of nine characters.

Five on the top line. Four on the bottom.

Messages such as “Tweet Me” and “Text Me” emerged from a marketing research process that’s ever-so-hip in today’s digital culture: a user-generated contest.

Sweetheart’s parent company, the New England Confectionery Co., opened an online forum in May so heart-munchers could type their own suggested messages. Twitter won out by a large margin.