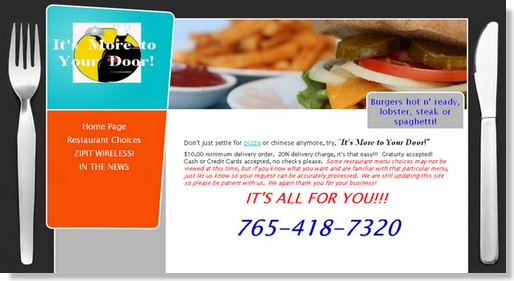 When Brian Dade moved to Lafayette from Indianapolis in February, he made a sudden realization.

“I thought, man, it’d be nice to get some Red Lobster or Subway delivered,” Dade said. “But all there really was around here was pizza and Chinese.”

So Dade, who already owned a company called BKD Productions, decided to start the home-delivery business about three months ago with his girlfriend, Gina VanSickle, according to a story at JConline.com.

It’s More To Your Door offers home delivery of food from 14 area restaurants — ranging from McDonald’s to McAllister’s and Don Pablo’s — for a 20 percent delivery charge. Customers can order via phone or the Web.

Dade and VanSickle run the business out of their home on Chimneylake Drive. That meant minimal startup costs, which allowed them to avoid investors and banks, Dade said.

Before they jumped into the business, Dade said he did intensive market research by passing out surveys asking residents if they’d be interested in such a home-delivery company.

Then, Dade said, he began calling area restaurants and franchises to ask permission to use their logos on the company’s Web site and fliers.

It’s More To Your Door has materials in about seven local hotels, Dade said. He said the company is doing strong business — especially on Fridays, Saturdays and during events at Purdue University.

Photo by It’s More To Your Door.