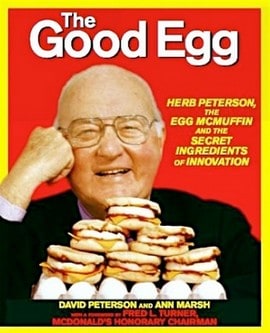 Herb Peterson changed breakfast forever and revolutionized the quick-service industry in America with the invention of the ubiquitous Egg McMuffin breakfast sandwich.

His son, David Peterson, with the help of Los Angeles Times columnist Ann Marsh, has written a book chronicling his father’s life and legacy, QSRWeb reports.

The Good Egg: Herb Peterson, the Egg McMuffin and the Secret Ingredients of Innovation,” outlines Herb Peterson’s career, from the beginning of his relationship with McDonald’s working for D’Arcy Advertising to running his own McDonald’s franchise stores in California.

Peterson came up with the idea for the Egg McMuffin as he looked for an opportunity to expand the chain’s offerings to breakfast.

Armed with an unyielding spirit of entrepreneurship, love for eggs benedict and a round iron ring, Herb created what would later be known as the Egg McMuffin, marking the start of breakfast at McDonald’s. By 1973, McDonald’s restaurants throughout the United States began opening their doors earlier, revolutionizing the quick-service industry and the way millions of Americans thought about breakfast.