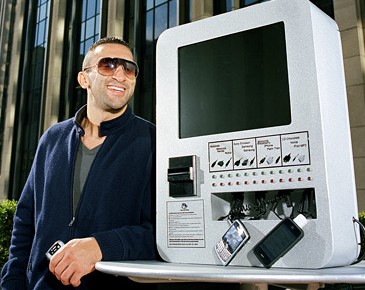 Paul King was headed to the airport in Pittsburgh in 2006 when he suffered an ill-timed communications blackout. His cell phone died and he realized he still had his roommate’s house key in his pocket, according to a story at CNNMoney.com.

If he didn’t call her to arrange a return, she would be locked out all weekend. But without access to his electronic phonebook, he didn’t know her number.

On his return trek, King drove past a number of ATMs and convenience stores. That’s when the idea struck him: You get cash anywhere. Why can’t you charge your phone anywhere?

Two years later, King decided he’d try to invent an automated charging machine — ACM for short. Then he learned that someone had beaten him to the punch. A Chinese company called TCN had already developed a public machine for charging cell phones and sold thousands of them in China.

King didn’t give up. Instead, he approached the company and asked to be its exclusive distributor in the United States, Mexico and Canada. They ended up cutting a deal: King’s New York-based business, Hercules Networks, raised $1.5 million from investors, including Miami real estate developer Michael Gold and a group led by serial entrepreneur David Walke. TCN agreed to add a screen to its machine, which would display advertising messages while users — paying $2 to $5 apiece — waited for their phones to charge.