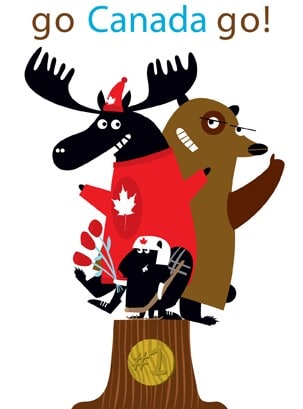 Unfazed by the trend toward e-everything, Maureen Stern is defiantly selling a product made of dead trees.

And in launching Canadian Capers, her own line of greeting cards, the 52-year-old Montrealer is not intimidated by Hallmark or the other titans of the industry, according to a story in The Gazette.

After moving down from the Laurentians, Maureen Stern compiled a CV that includes stints in journalism, corporate communications and advertising. She was creative director of an ad agency – think Don Draper in Mad Men – and is used to working with artists.

“The greeting cards are kind of an extension for me,” Stern says. “It’s about creating characters who are like brands. I’d been building brands for other people and decided to do it for myself.

“And I really wanted to have fun with it.”

Stern’s fascination with cartoon characters dates back to her childhood. She is not an illustrator, but she had ideas.

“I honestly think it’s the greatest gift. You open a card, you read a message and it kind of makes your day.”

Canadian Capers features a cast of characters – including a moose in a Mountie hat, a beaver and a bear – cavorting in Canadian settings.