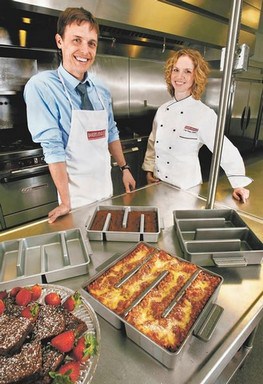 Matt Griffin was a young bachelor just trying to figure out how to bake some brownies when he hit on an idea that has really cooked, reports The Indianapolis Star.

In this case, Griffin’s idea was a better baking pan for brownies. His goal was to cook every piece of the popular comfort food so that none of it is left undercooked or gooey in the center.

Key to this brownie technology is that parts of the nonstick aluminum walls extend into the middle of the pan, allowing even heating.

During the past decade, Matt and his wife, Emily Griffin, refined the concept and formed a startup company that they named Baker’s Edge. They patented the cookware technology and gradually found a market for the Baker’s Edge Brownie Pan.

“We sold about 130,000 brownie pans last year and about 5,000 of our new lasagna pan. Our goal is about 160,000 pans this year,” Griffin said. “We’re told that our brownie pan is one of the most requested items in the bridal and gift registry in Amazon.com.”

Photo by The Indianapolis Star.