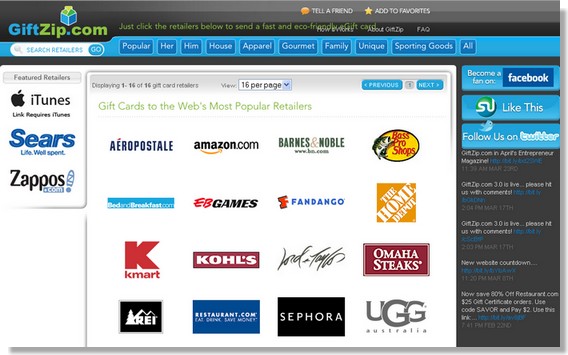 According to a story at Entrepreneur.com, putzing around during a sustainable supply chain management course at Michigan State University’s Broad College of Business in 2008, then-MBA student Sam Hogg opened his wallet and stared at one of several plastic gift cards he had received for Christmas.

I thought: ‘This is so stupid and wasteful,'” he says. “So I started to form this business model when I should have been taking notes.”

The course challenged Hogg and his classmates to examine supply chain inefficiencies from creation to elimination, a deviation from the traditional supply chain rhetoric that focuses on the quickest and most cost-effective way to drive a product to market.

“This class taught us to think cradle to cradle. For example, at face value you may think an SUV is far worse for the environment than a hybrid, neglecting to consider the impact of battery disposal. There are costs in both use and disposal, and the answers aren’t that easy. The same is true of gift cards,” Hogg says.

In November 2008, he launched East Lansing-based GiftZip.com, an electronic gift card aggregation site that has the potential to dramatically downsize a wasteful supply chain.

“I looked at gift cards and saw that 75 million pounds of them go into landfills every year,” Hogg says. “If people heard that, they would never buy another plastic gift card.”

Since GiftZip’s launch, usage has increased by 2,100 percent. “We’re not at a scale yet where we can make a dent in the waste from plastic gift cards, but five years from now, who knows?” he says.

Hogg also used skills gleaned in business school to create his site, which places competing retailers next to one another–a model outlined by a marketing professor who suggested consumers are more likely to buy a product when given multiple choices, even if those choices sit next to competing brands.

“I thought maybe Macy’s would sell more gift cards if they were right next to Target,” he says. According to Hogg’s retailer participation, which has grown from 120 to 275 retailers, the model works.

He continues to meet with and seek advice from multiple professors, and his classmates have helped promote his service. “We sent out e-mails to 110 of my classmates who are placed within some of the largest corporations and largest HR offices all over the country,” Hogg says. “You don’t need an MBA to start a business, but I couldn’t have gotten that from scratching my head in a basement.”