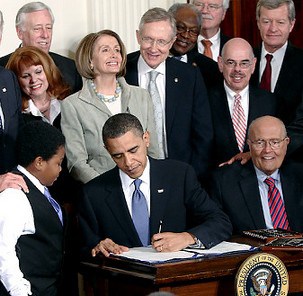 Inc.com reports that one important aspect of the legislation: Two part-timers count as one full-timer for the purposes of determining whether a business is required by law to provide health insurance.

For small businesses, it may be a case of the best of times and the worst of times. A group long distrustful of government stands to benefit early and often from the health care reform legislation President Barack Obama signed into law.

But as 14 states challenges the legislation in court and Republicans make its repeal a 2010 campaign theme, many entrepreneurs are wondering what will come next–and how they will be affected.

The National Federation of Independent Business, a conservative interest group that opposed the Democratic reform bill, estimates that only about 12 percent of small businesses will benefit from the tax credits. Though a sliding scale of credits is designed to help foot the bill, there’s a maximum rebate of 50 percent starting in 2014, and the credit disappears after five years.

Moreover, the 50-percent credit is only available to firms with fewer than 10 employees and average annual wages of less than $25,000. The federation’s New Jersey chapter has pointed out that the average salary for its 8,000 members is $27,000. The NFIB also claims some 5 million jobs will be lost in five years, a casualty of small business owners forced to choose paying for healthcare over keeping an employee.

“If there’s any good news, implementation is staggered,” Bill Cron, associate dean of the Neeley School of Business at Texas Christian University continued. “A lot will be stretched over the next three-to-five years. I think for the most part, this legislation had to do with the availability of health care and not as much as cost.”