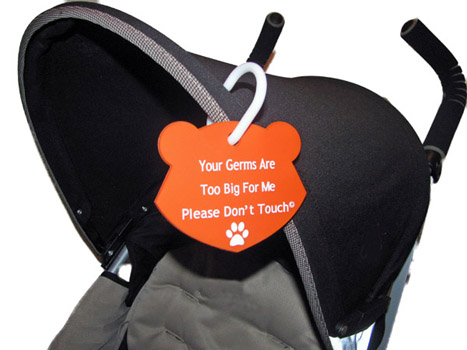 After Kimberly Levine had her son she soon learned just how much strangers like to look at and hold babies, says The Palm Beach Post. As sweet as their intent was, she also didn’t want just anyone walking over and touching her child. Inspired by the “baby on board” signs that people hang in their car, Kimberly created something unique that she could hang from her son’s stroller.

Levine said that a few people were critical but that other mothers asked her where they could get one.

With the help of her husband, Levine created an online company in December called Kind Signs.

Currently, Levine sells only the stroller sign through her Web site, MamaBears.com. “You don’t mess with a mama bear,” she said of the name. But, she plans to expand her business.

The signs, which come in blue, orange and pink, are soft silicone cutouts of a bear’s head that read:

“Your Germs Are Too Big For Me/Please Don’t Touch.”

Levine said she’s sold more than 150 signs, almost half of which went to international destinations.