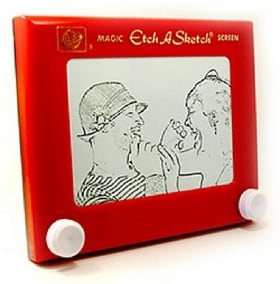 Scientific American reports advances in science and technology can launch from unassuming springboards.

In 1609 Galileo tweaked a toylike spyglass, pointed it at the moon and Jupiter (not the neighbors), and astronomy took a quantum leap. About 150 years later, Benjamin Franklin reportedly used a kite to experiment with one of the earliest-known electrical capacitors.

Etch A Sketch
“The laboratory is basically a glorified playroom,” says Jeremy Levy, physics professor at the University of Pittsburgh. “When we do experiments, it is a highly advanced form of play…we’re exploring new things.”

Levy’s current explorations stem from his memories of a childhood drawing toy. While visiting Germany’s University of Augsburg in 2006, he observed a tiny chip made of two insulating layers. The chip intrigued Levy because the area between the layers could switch properties–from insulating to conducting, and back again–when researchers applied voltage. “While they were showing me the data, I was thinking about Etch A Sketch,” Levy says.

To draw lines, the toy’s stylus scrapes aluminum powder from the underside of a glass screen. Levy wondered if an Etch A Sketch approach could build on the German researchers’ findings to draw and erase nanowires?