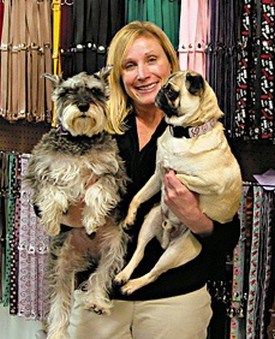 According to a story in The Hartford Business Journal, it’s not the 40 percent growth a year or the international shipments that make Poochie Pets founder Cheryl Pedersen glow with pride.

For Pedersen, her greatest joy comes from working with canines.

Poochie Pets has been in business for five years, four of which were spent working out of Pedersen’s basement. Since its start, Pedersen says she has made over 200,000 pet items – everything from a special link on a leash for a pet owner to stash keys to the ever popular doorbell potty training tools.

These items, known as Poochie-Bells, are designed to make a dog owner’s life easier. They hang over a doorknob or hook and the idea is that the pet learns how to knock into them when it has to go to the bathroom. Pedersen recommends starting a dog using the bells at 10 weeks old.

Pedersen says her products can be found in boutiques and mid-sized chains “in every state in the U.S except the Dakotas.” She also has international distribution in several countries including Switzerland. She says she intends to keep her products out of huge retail stores. She takes pride, she says, in the fact that they are only available to small and medium-sized pet stores, which she sees as part of her marketing niche.