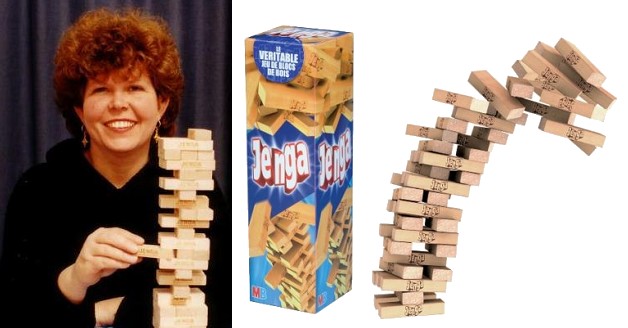 Leslie Scott is the inventor of Jenga, the co-founder of Oxford Games Ltd, and the author of ‘About Jenga: The Remarkable Business of Creating a Game that Became a Household Name, according to a story at Inventors Digest.

Born and raised in Africa, and educated in Sierra Leone, Kenya and England, Scott worked for Intel ( the inventors of the microcomputer), before embarking on a career as a professional games designer.

Jenga was created by Leslie Scott based on a game that evolved within her family in the early 1970s using children’s wood building blocks the family purchased from a sawmill in Takoradi, Ghana. Though a British national, Scott was born in East Africa, where she was raised speaking English and Swahili, before moving to live in Ghana, West Africa.

Scott manufactured and launched the game she named and trademarked as ‘Jenga’ at the London Toy Fair in 1983 and sold it through her own company, Leslie Scott Associate.

Listen as Leslie shares her experience prototyping and bringing Jenga to market, with Got Invention Radio.