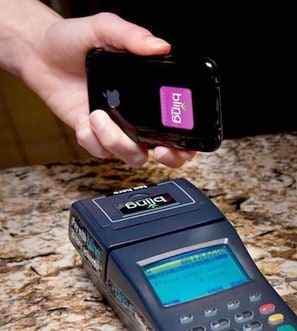 Phones are the new credit cards says the San Jose Mercury News. Meyer Malka walked up to the counter of a crowded Palo Alto cafe last week and ordered a small coffee and a hot chocolate. The total was $5.74, which he paid by lightly tapping the back of his mobile phone against a small plastic box next to the cash register.

Within seconds, the screen on the box displayed a message telling the cashier the payment was approved, and Malka received a text message saying the amount had been deducted from his account at a local credit union.

For years, analysts have been saying that mobile payment systems – which let consumers use their phones instead of debit or credit cards – are the wave of the future. Widespread adoption has been elusive, but now some analysts say the idea is gaining traction.

Malka, co-founder of a company called Bling Nation, can use his phone for purchases at only a few shops near his office in downtown Palo Alto. But Bling Nation says it has partnered with banks in five regions around the country, including Colorado, Texas and upstate New York, where several thousand customers are using their phones to “Bling” their purchases at scores of local shops.

Big financial institutions and phone companies have been slow to embrace the concept, for a variety of reasons, explained Steve Klebe, a veteran e-commerce executive who writes a blog.