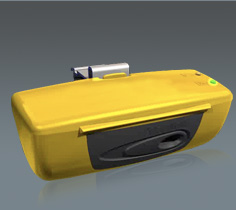 The smell of wheeled garbage bins was bothering Daniel Woolman so he decided to do something about it reports the Telegraph.

Woolman, 27, invented Binifresh, a device that sits permanently inside the bin and every four hours releases a spray that kills bacteria and germs and eradicates odours.

Now Binifresh – complete with UK and US patents – is set to stop the stench across the UK and possibly overseas.

He had the idea while studying history at Leeds University. “I lived on the ground floor right by the bins. The stench was awful,” he says.

“I thought there had to be a solution – not powders and sprays but a more permanent solution, something I didn’t have to keep worrying about.”

It turned out there was not, so Woolman set about creating his own. He raised Â£50,000 to research the cocktail of chemicals needed, commissioned a lab to produce the formula and manufactured a prototype.

It began to generate interest from retailers, which meant he had to find a way to manufacture Binifresh on a sufficient scale to meet the growing demand from supermarkets.

Backed by a Â£250,000 investment in the north London-based Bini Products Ltd, Woolman moved to China for six months so he could oversee production.

It has taken three years for the young entrepreneur to see his Binifresh reach the shelves – it’s now on sale in John Lewis, Asda and mail order via Lakeland. Tesco and Sainsbury’s are set to list Binifresh soon, he says. The business is on track to hit Â£1.5m turnover in its first year.