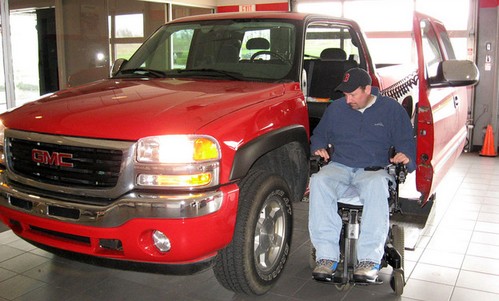 According to NPR, Steve Kitchin, who was in his 30s at the time, became a quadriplegic. His legs were paralyzed, but he still has some use of his arms.

More than anything, Kitchin wanted to drive again. He got a minivan with hand controls for the gas and brake. The only problem was, he’s the type of guy who closely links his identity to his vehicle.

So he looked around for other options. Honda is working on an Element for people with disabilities, and there is a company in Florida that converts basic pickups. But Kitchin really wanted a four-wheel drive. So, the former advertising executive designed his dream truck in the back of a barn.

He used the prototype to create a new company. But before he could even secure a factory, he was inundated with vehicle requests. Up until this point, Kitchin had funded much of the project out of his pocket, and he was just about out of money.

That’s when Tom Kelley stepped in. Kelley owns six auto dealerships in the area. He had recently lost his Saturn dealership, and the building was sitting empty. So he offered it for free.

Kitchin expects that his company will eventually employ 200 people. That’s good news for the Fort Wayne area, a hard-hit manufacturing community. Kirk McKenzie, who was laid off from a nearby forklift factory, says his new job gives him more than a paycheck.

“It makes you feel good at the end of the day,” McKenzie says.