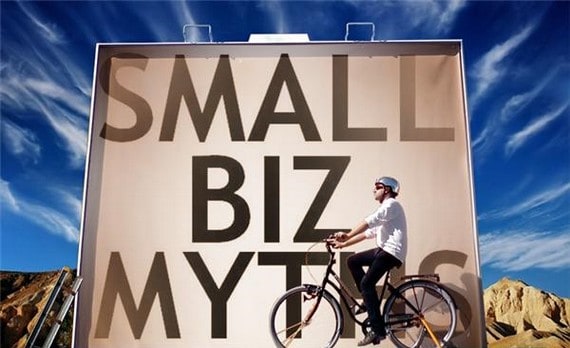 Anne Field at True/Slant takes a look at widely held misconceptions about small business that tend to be reinforced constantly by the media:

1. Venture capital is a viable funding source for many, if not most, startups.
Some very glamorous companies like Google and Twitter have received lots of VC money. But, here are the facts: Less than 1% of small businesses get venture funding from traditional VCs. Over the last five years or so, the average number was about 3,000 to 4,000 a year, according to Steve King of Emergent Research.

2. A veritable horde of small businesses are using social media like Facebook and Twitter and are experiencing phenomenal results.
According to a recent Citibank survey of 552 small businesses, 81% have not used social media for marketing or other business purposes. And of those, 47% don’t believe the sites are of value and another 21% feel they’re more for personal than business use. That’s not to say small-businesses won’t start turning to social media soon. Some 30% say they intend to use social networking sites for marketing over the next 12 months. But, they’re not doing it now.

3. A lot of businesses get SBA loans.
In fact, last year, a measly number of companies received a loan from the 7(a) program, which accounts for the majority of SBA lending, according to Case Western Reserve’s Scott Shane. To be more exact, less than 1% of companies with employees got one of these loans.

4. And, just as a reminder about the misguided focus on young entrepreneurs, the Kauffman Foundation found a higher rate of startup activity by those age 55 to 64 than 20 to 34 every year from 1996 to 2007.