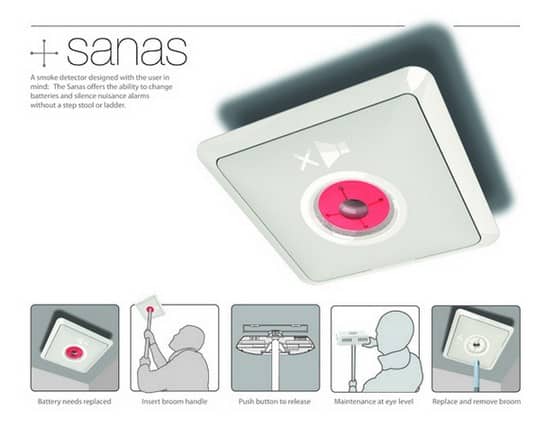 When Trevis Kurz looked around at his surroundings last March, he knew he was representing Ohio State to people from all over the world. The commotion was incredible, the excitement was infectious and the competition seemed insurmountable.

Kurz is not a five-star recruit on the men’s basketball team. He is a third-year in industrial design who placed first at the 2010 International Home + Housewares Show in Chicago, reports The Lantern.

Kurz’s winning entry in Chicago was what he called the Sanas Smoke Alarm. Kurz had been assigned to the baby boomer generation and discovered that many people he talked to had problems changing the batteries on their alarms.

“I found out that a lot of people couldn’t even access their smoke alarms without a ladder, and so the whole premise for me was to design a smoke alarm that you could access without getting off the ground,” Kurz said.

So he designed a model that works with an everyday broom handle, using a quick-release spring to drop the alarm down the broom handle to eye level for battery changing and a face that acts as an “off button” that can be hit if the alarm sounds and there isn’t a fire.