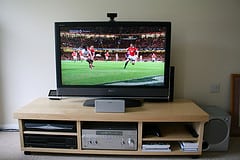 Most of us who own our own blogs probably have never even thought about little own considered advertising their blog on television. It’s just not the obvious thing to think about when working with your blog. But surprisingly advertising a blog on television is not only an awesome idea, but it can also be done for much cheaper then you would probably think.

Google TV is part of Google AdWords, and it works much the same way. It’s an auction-based system where you choose the price you want to pay. Obviously, the more you pay, the more people you’re likely to reach. But it’s possible to run an ad on network television for as little as $20. As stated recently on Copyblogger.

So why is it such a great idea to advertise your blog on television? Well, consider how big the general public is…some couple million people or so, multiply that by the average amount of television that these people watch a day which is anywhere from 3 to 5 hours a day, and you have a lot of people watching your advertisement numerous times in a short period of television time!

Imagine how many people that is that your advertisement (depending on the channel you advertise on) would reach and thus all the feedback, business, new members, referrals and more that would start flowing in. I don’t believe i could think of a better place to advertise on then television!

How byMarketers Marketplace Will Help Your Agency Succeed

How byMarketers Marketplace Will Help Your Agency Succeed