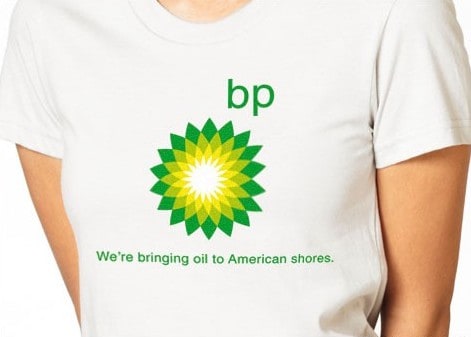 According to CNNMoney, BP’s oil spill is an expensive disaster for the Gulf Coast, but it’s turning into a gold mine for entrepreneurs.

Hundreds of parody products are now on sale across the Web, taking aim at BP’s sunburst logo and “responsibility” pledges. There’s tote bags and buttons on Etsy, coffee mugs on Zazzle, and t-shirts on nearly every e-tail site with a PayPal button.

Buyers are snapping them up. Despair Inc., a popular retailer of black-humored merchandise, got into the game early, releasing a t-shirt three weeks ago with the slogan “BP: We’re bringing oil to American shores.”

A typical bestselling product moves a few hundred units for the small, Austin-based company. The BP design has sold a close to 2,000 shirts, according to Lawrence Kersten, Despair’s co-founder.

“When you have a combination of cultural relevance and wittiness and cultural appeal, people respond,” Kersten says of the shirts’ raging success. Despair recently added a second shirt to its BP line, depicting the sunny BP logo dripping with oil.