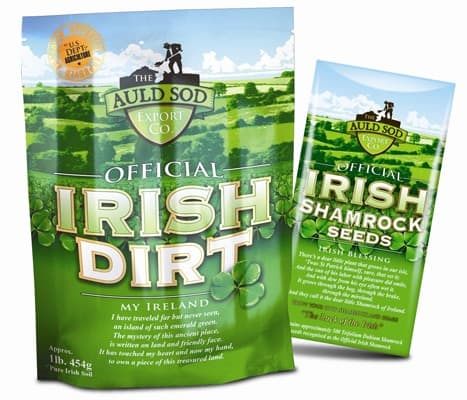 In a world of music-playing phones, Internet-enabled refrigerators and satellite-based car navigation, some companies still find success with such low-tech products as urine, dirt and even air. WalletPop has the story.

A clever duo from Ireland was inspired by the ground under their feet. Business partners Pat Burke and Alan Jenkins founded the Auld Sod Export Company to sell “Official Irish Dirt” by the pound to those who want to “own a little piece of Ireland no matter how far from the Emerald Isle (they) are.” According to an article in The New York Times, the company shipped $2 million worth to the United States in the first 5 to 6 months of launching its web site in November 2006.

Go to virtually any commercial tourist destination and you are sure to come across a souvenir penny press machine. Insert a couple of quarters and a penny and you get a squashed coin with a reminder of your trip imprinted onto it (like a Mickey Mouse face) in return. It’s a cheap souvenir for you and a great return for the machine owner.

The folks at BigOX sell flavored oxygen for $14.95 a can. “Oxygen is known to help with headaches, drowsiness, fatigue during strenuous exercise, helps promote healthy skin, and generates healthy red blood cells for over all well being,” said Dan Jungers, the managing partner of the company behind the product.

In 1986, the folks at Lexington Outdoors, an outdoor supply store in Lincoln, Maine, began selling urine from predators such as wolves, foxes and mountain lions to hunters. The product, known as Predator Pee, unexpectedly became a hit with gardeners eager to keep pesky varmints such as mice and deer away from their plants. Business is good, growing at 10% to 20% a year.

Last, but not least, the poster child for products like these is the Pet Rock. This fad took place in the 1970s and Pet Rocks were ordinary gray pebbles bought at a builder’s supply store and marketed as if they were live pets. They sold for $3.95 each and made the creator, Gary Dahl, a millionaire.