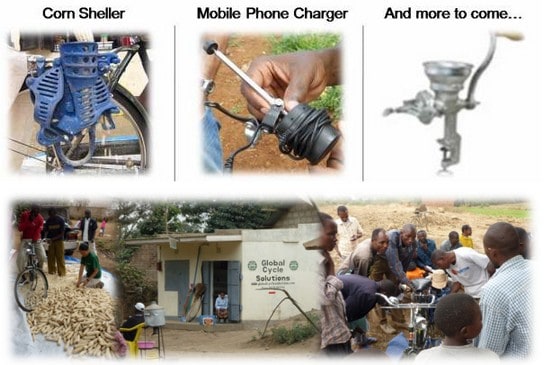 According to Bloomberg BusinessWeek, Global Cycle Solutions makes gadgets that let farmers in the developing world use bicycles to shell maize or charge mobile phones.

Jodie Wu conceived the idea in 2008 while a student at MIT’s D-Lab, which incubates technologies for developing countries. She and six co-founders launched the business in 2009 with $30,000 from an MIT business plan competition and $200,000 from angel investors.

The company’s devices each attach to the back of a bicycle and make use of pedaling power. Global Cycle Solutions began manufacturing products in Tanzania late last year and Wu, 23, says she expects to expand production to China or India.

She also plans further bike-powered attachments, including one to grind corn into flour. “We are creating technologies that help … farmers take their first step out of poverty, without any dependency on electricity or fuel,” Wu says in an e-mail from Tanzania.

Because all a customer needs is a bicycle, Wu says, “there are no barriers to the scalability and flexibility in the future products to come.”