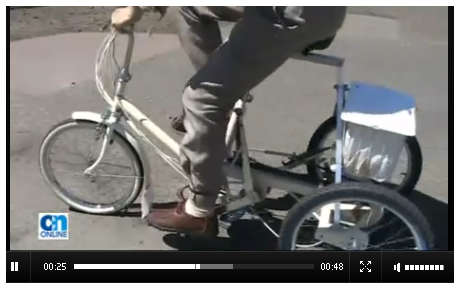 Kenneth Roy Sherhod, 80, has designed and built the tricycle, which is operated by pedals which move up and down rather than round and round, as on regular bicycles.

The new tricycle is based on Archimedes’ principle of levers.

Mr Sherhod built the Archimedes Lever Tricycle as a retirement hobby and rides it, mostly for exercise, around the cycle paths in Histon, where he lives. He describes the trike as more of a shopper than a racer and it has 15 speeds which are achieved by moving an attachment point up and down a lever.

The inventor is no stranger to designing and building contraptions.

He worked most of his life as an aerospace design engineer, and has designed and built two other bikes.

One of these involves a pedalling system for people who can only use one leg, and the other is a recumbent bicycle, which allows people to cycle in a reclined position.