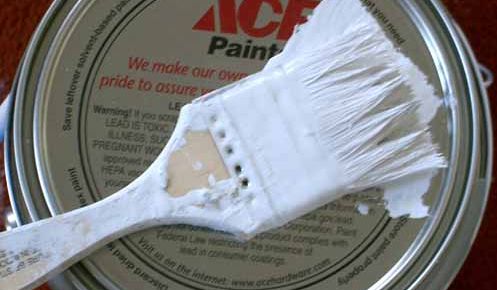 By painting the mountains, Eduardo Gold hopes to replicate the effect of Andean glaciers, which reflect back sunlight and hence heat back through the atmosphere.

The technique is scientifically plausible and, according to some scientists, may be the only method of lowering global temperatures in a crisis.

“A white surface reflects the sun’s rays back through the atmosphere and into space, in doing so it cools the area around it too,” said the 55-year-old activist. “In effect in creates a micro-climate, so we can say that the cold generates more cold, just as heat generates more heat.”

It is hoped the project will slow the melting of the glaciers.

The project is a low technology remedy for global warming. The workers use an environmentally-friendly mix of lime, industrial egg white and water, which is known to have been used since Peru’s colonial times

The whitewash is slopped out on the slopes from jugs.

If the underlying theory, which is known as Solar Radiation Management, works the glacier should re-emerge in a cooler micro-climate.

The Â£135,000-project is funded by the World Bank after Mr Gold won a “100 Ideas to Save the Planet” competition last year.