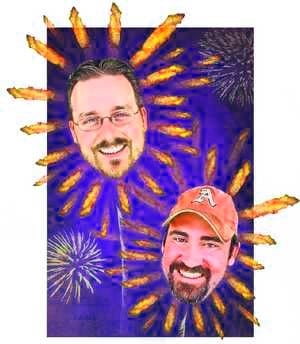 The Kansas City Star reports that It’s not hard to come up with theories on how the Bacon Explosion got its name, but here’s the real story, straight from the pig’s snout:

It was December 2008, and Jason Day had something to show his barbecue contest teammate Aaron Chronister. Day, having thrown back some holiday cheer at one Christmas party, showed up late in the evening for his second party, at Chronister’s place in Brookside.

Hmmm. Bacon Explosion. “I was like, ‘Hey, that’s a good name for it,’?” Chronister remembers saying.

Guests at the first party had mostly turned up their noses at Day’s culinary creation. It was a different story at Chronister’s house – people there ripped into it. The host remembers having to hide an end piece for his breakfast the next morning.

If you’re a pork fan you probably know what happened next: The bacon buds posted the recipe and pictures of that first Bacon Explosion on their website. Then Chronister tweeted it “to a few people,” the recipe went viral, The New York Times wrote about it – and then the recipe went crazy viral.

The story about the recipe’s online popularity would become the second most-read article on the Times’ website for all of 2009. Even today, search bacon on Google, and bacon explosion is the first possibility that pops up.