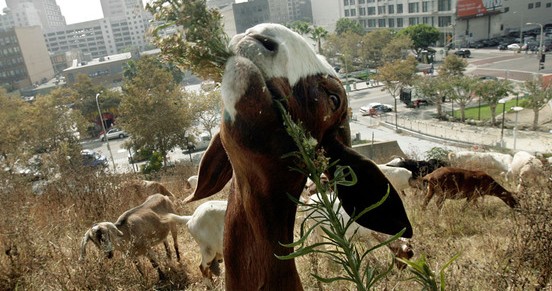 The peace of an otherwise quiet summer weekend is often muddled by the sound of lawn mowers and leaf blowers. NPR reports that In Los Angeles’ business district, an old-fashioned method of ground control provides an alternative soundtrack – the munching of goats.

In a steep hillside city park on Bunker Hill, right next to the world’s shortest railway, 120 goats are about to be deployed. “Oh my gosh, they’re so cute,” Nate Giddings says as he makes his way to work in a nearby skyscraper.

There are baby goats and mama goats, but they’re all hungry goats. This natural landscaping crew was trucked in from a farm in San Diego. Their assignment: mowing down the unruly growth of brush on these 2 1/2 acres.

The Community Redevelopment Agency of Los Angeles thinks it’s smart – not to mention ecological. This is the third year in a row the agency has hired a herd to tend this unwieldy land.

The goats belong to Johnny Gonzalez, who says they get an undeserved bad rap. “Goats are great survivalists,” he says. “They learn to survive on meager means, so people tend to think of them as doing something destructive. But the goats allow the natural plants to take hold and pretty much do away with all the invasive weeds and grasses.”

They also entertain thousands of passersby in the process.