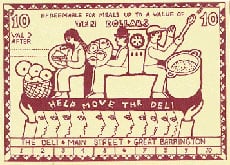 I just ate today at a local Deli that changed hands recently. I wonder if the owner is wishing right now he had some extra capital to expand? Maybe I need to mention this to him (her? don’t know, new owner!) The “Deli Dollar” described below is pictured above!

More importantly – could you use it?

Frank Tortoriello is the owner of a popular deli on Main Street in Great Barrington. He turned to SHARE when the bank refused him a loan to move his restaurant to a new location. But Frank didn’t need SHARE’s circle of grandmothers; he already had a circle of his own in his customers. SHARE suggested that Frank issue Deli Dollars as a self-financing technique. The notes would be purchased during a month of sale and redeemed after the Deli had moved to its new location. A local artist, Martha Shaw, designed the note, which showed a host of people carrying Frank and his staff-all busy cooking-to their new location. The notes were marked “redeemable for meals up to a value of ten dollars.” The Deli would not be able to redeem all the notes at once after the move, so SHARE advised Frank to stagger repayment over a year by placing a “valid after” date on each note. To discourage counterfeiting Frank signed every note individually like a check.

We recommended that the notes be sold for ten dollars each, but Frank thought that would be too good a deal for the Deli. With his customers in mind he sold ten-dollar notes for eight dollars and raised $5,000 in thirty days: contractors bought sets of Deli Dollars as Christmas presents for their construction crews; parents of students at nearby Simon’s Rock College knew Deli Dollars would make a good gift for their kids; the bankers who turned down the original loan request supported Frank by buying Deli Dollars. The notes even showed up in the collection plate of the First Congregational Church because church-goers knew the minister ate breakfast at the Deli. Regular customers were pleased to help support what they saw was a sure thing-they knew firsthand how hard Frank worked and believed in his ability to make good on redemption. Frank repaid the loan, not in hard-to-come-by federal notes but in cheese-on-rye sandwiches.

I know I buy coupon books as school fundraisers every year. My wife stores these in her purse and they’re available later. I can see us doing something like this for a “good cause”. Can’t you?

If you already have a viable loyal (usually local) customer base, especially if you can give them a “reason why” you’re doing this, and a reasonable time frame for redemption… you may never have to grovel before a banker ever again! (Unless you WANT them to turn you down so you can guilt them into buying some of your coupons like this Deli owner was able to do!)

Note: Don’t emulate blindly. You need to understand your costs of doing business. If you’re pizza pie shop, your cost of raw materials may be 10% of the sales price.

If you’re a health food store selling supplements, your costs may be 50% or more. Knowing his costs, he was able to discount and give a $10 meal for $8. You may or may not be able to do the same!