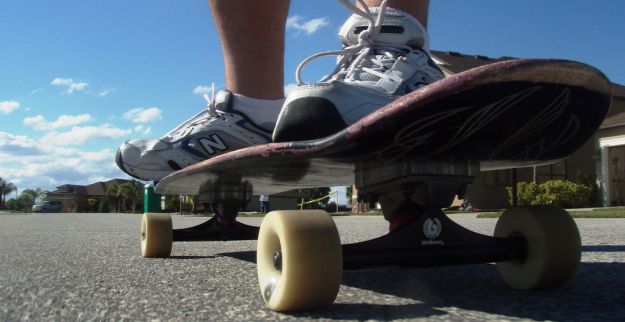 While most teens are spending their summer sleeping in Alex Wells has been hard at work creating jewelry for his business, Rebound says the Daily Press.

For almost a year and a half, Wells has been taking used and broken skateboards and creating aesthetically and artistically creative pieces of jewelry. The idea for the jewelry, which includes belt buckles, necklace charms and rings, first came to Wells while he was browsing the Internet.

“I saw one picture on the internet – one ring, and I was like ‘wow, I think I can make that and even make it cooler,'” he explained. “After I saw that picture, the next day I walked into woodshop with a board and I said ‘Mr. Young, I’m sorry, I don’t have a plan for this, I don’t have anything for it, but I think it would be really cool.’ He allowed me to work on it and that same day, I finished my first ring and it was really, really nice and I was super proud of it.”

Not long after creating his first ring, Wells realized that the symmetrical and abstract pieces of jewelry could have an even greater appeal to the masses. With the help of his father, Michael Wells, owner of Skin Deep in Escanaba, Wells began making enough jewelry to sell.

“I started out making the rings and then it expanded,” he explained. “I moved in with my dad and he bought me tons of tools and then it just went from making two or three rings and little belt buckles a week to around five or six a day. I have been selling them like crazy.”

According to Wells, his father’s support has been an important part of his success. In fact, Wells even rents a workshop directly above his father’s business.

Using money from his birthday in June, Wells purchased even more tools to contribute to his work. Though he has friends keep him company while he works, Wells notes that this operation has been his own undertaking.

“It is sort of depressing when you don’t sell stuff, but at the same time you have so much more to look at, show people and work for,” he said. “I’ve been selling them pretty good so far and that makes me happy.”