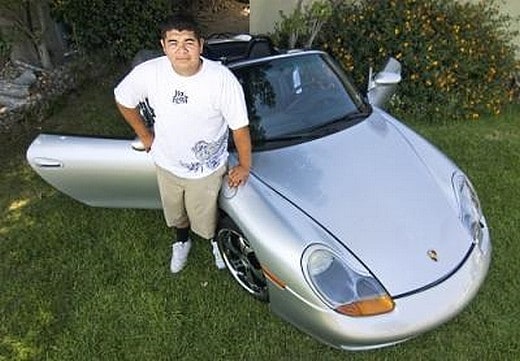 Seventeen-year-old Steven Ortiz is fairly sure he is the only student at Charter Oak High School who drives a convertible Porsche to school.

Steven started with an old cell phone and eventually traded up to his impressive ride.

It didn’t happen overnight, but with the help of the Craigslist website and a lot of patience, Steven made 14 online swaps over two years to get his 2000 Porsche Boxster S.

According to The San Gabriel Valley Tribune, Steven is part of a growing number of people who use the barter section of Craigslist to unload unwanted items and acquire desired goods, rather than just buying and selling them.

Steven started his lucrative journey when his friend gave him an old cell phone – the sort most people would throw away or shove into a junk drawer.

He traded that phone for a better phone, which he then traded for an i-Pod touch. He traded that for a series of dirt bikes, a MacBook Pro, and a 1987 Toyota 4Runner.

At the time, Steven was just 15 and unable to drive his new acquisition. So he quickly swapped it out for a souped-up off-road golfcart, another more valuable dirt bike, a streetbike, then a series of cars ending with a 1975 Ford Bronco. He spent a few months enjoying each acquisition before determining he was looking for something else.

It was that Bronco that got him the Porsche. Because some older Broncos are considered collectibles, Steven estimated his was worth $15,000.

He got offered all manner of trades – including a locksmith business – for the Bronco. The Porsche, worth about $9,000, was actually a trade down.