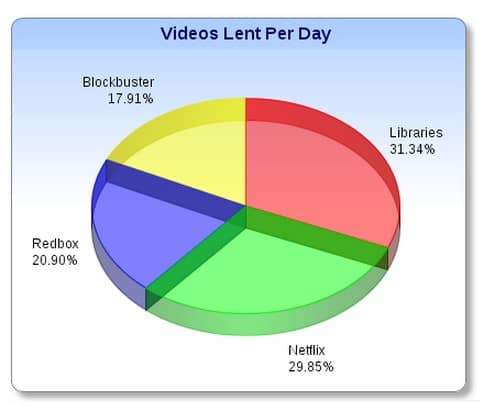 Red boxes, red envelopes and the blue and yellow Blockbuster stores may dominate the movie rental landscape, but according to a recent survey, when Americans want to watch a DVD, they are most likely to turn to their local library.

The Hartford Courant reports the survey, released this year by OCLC, a nonprofit library co-operative and research organization, found that public libraries in the United States lend an average 2.1 million videos every day, slightly more than the 2 million that Netflix ships. The other top two competitors, Redbox and Blockbuster, come in at 1.4 million and 1.2 million respectively, according to daily averages provided by company representatives.

The findings were part of a report called “How Libraries Stack Up,” which highlights the many roles that libraries play in communities, according to OCLC market analysis manager Peggy Gallagher. It also includes statistics on career assistance and Wi-Fi use – the extent of which might be surprising to the general public or even to businesses offering similar services.