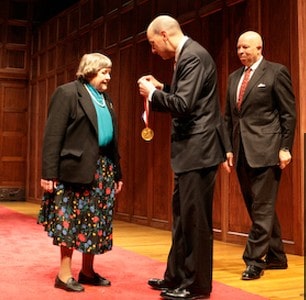 At a ceremony held at the Department of Commerce in Washington, D.C., the 2010 class of the National Inventors Hall of Fame was formally inducted.

Their innovations have saved millions of lives, improved the quality of life for countless others and transformed the way just about everyone on the planet communicates, navigates and entertains themselves.”

The inductees include the following living inventors:

– Ralph Baer, inventor of television video games which has now spawned a $15 billion a year industry.
– Yvonne Brill, inventor of the hydrazine resistojet propulsion systems used in most geosynchronous communication satellites.
– Spencer Silver and Arthur Fry, who together, invented pressure sensitive adhesives that when applied to the edge of a piece of paper gave birth to 3M’s popular Post-It Notes product.
– Donald Stookey for glass ceramics used in cookware products such as Corning Ware.
– Roger Easton, inventor of the TIMATION system that forms the basis of today’s network of Global Positioning System (GPS) satellites which provide precise location data for military and civilian users.

In addition to the six living inventors, 10 others were recognized posthumously. Those include: