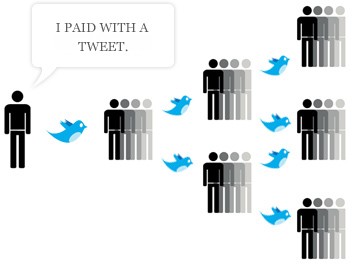 Traditional advertising can no longer hold a candle to promotion via social media and aiming to make the value of such social endorsements explicit, Pay with a Tweet is a platform that lets content owners sell their goods in exchange for a single tweet rather than cash, reports trendspotter Springwise.

Developed by Innovative Thunder, Pay with a Tweet bills itself as “the first social payment system where people pay with the value of their social network.”

Purchasers, then, follow a “forced viral” model to promote the product in question far and wide.

Traditional advertising’s impact has been fading for some time now, but this is one of the first attempts we’ve seen to make social media’s value explicit.