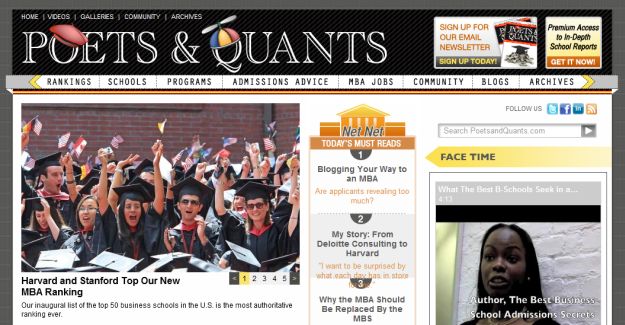 John A. Byrne it using his bank of knowledge and research on schools to help potential MBA’s find the right school for them through his new website, Poets and Quants. His aim is to share with students a closer look at the various degree programs and to tell the truth about the facilities, their teaching methods and reputation reports the Washington Street Journal.

The site, which went live on Monday, offers visitors a new ranking Mr. Byrne devised himself based on existing rankings produced by Bloomberg BusinessWeek, the Financial Times, U.S. News & World Report, Forbes and The Economist.

“There are a lot of players in the game, but each of the traditional media rankings has its own particular take,” Mr. Byrne says. “The FT, for example, takes into account how many female professors a program employs. That may be politically correct, but it doesn’t really tell a prospective student if that school will be the best for them.”

So far, 95% of the content, including photos and videos, was reported, written and edited by Mr. Byrne. The site includes detailed “smackdowns” that pit schools such as University of Pennsylvania’s Wharton School of Business and Columbia Business School—both finance powerhouses—against each other. (Columbia has one of the worst facilities of any top b-school, Mr. Byrne opines.)

Screenshot from Poets and Quants