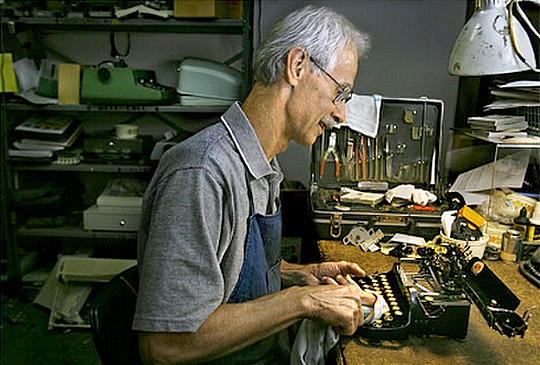 High technology and green energy may yet provide the solution to unemployment numbers that continue to hover near double digits.

But, according to The Kansas City Star, while some people wait for the digital future, others are doing just fine with careers anchored in the past.

Whether it’s making old-fashioned milk shakes, developing film or repairing typewriters, the challenge is to adapt to the times and find ways to make time-honored skills relevant in today’s economy.

Daryl Martin made that transition as the quiet hum of computers replaced the clickety-clack of typewriters. He started his career in the mid-1970s, when typing pools were regular features in most offices.

“Many companies had a large number of typists who worked for eight hours a day,” he said. “I was 23 years old and needed a job, so I became a typewriter repairman. It was a fairly good business back in the late ’70s and early ’80s.”

Even with the prevalence of computers, many people still like to keep a typewriter around.

“We have an older clientele, for the most part,” Martin said. “A number of companies still like to use a typewriter on occasion, such as when they have only one envelope to address and mail. Some people are nostalgic and want to use a typewriter because their parents did.”

Martin gets satisfaction from doing the same job he was trained to do 36 years ago.