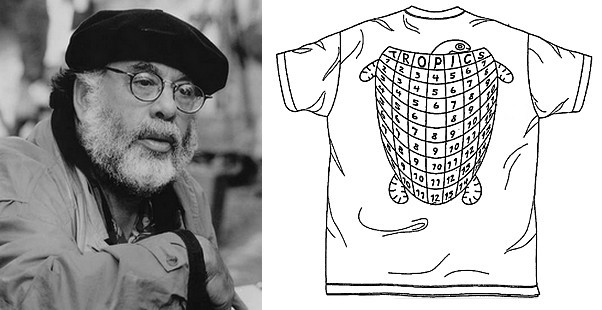 Some celebrities aren’t just pretty faces. A few of them are also touched with that Yankee prowess for tinkering and invention, according to the Atlantic magazine.

Critically acclaimed producer, director, and screenwriter, Francis Ford Coppola had dominated that whole film industry scene by his mid-thirties. After winning a bunch of Oscars for his Godfather films, American Graffiti, and Patton, Coppola figured anything he touched would turn into little golden statuettes. And right he was.

His invention? “A garment for identifying location on body of the garment wearer”. It’s a t-shirt with a turtle on it. But not just any turtle, a turtle with numbers on its shell. The numbered grid uniquely marks different regions of the shirt so that its wearer can identify a particular part of his/her own body to a friend, family member or significant other.

Coppola argues it will improve your daily life with this hilariously detailed sketch of the travails of backscratching:

For example, scratching an itch is a very common task in every day life. It can be especially difficult, however, for a person to scratch his or her own itch when the location of the itch is in a hard-to-reach spot such as the back. Presently, absent a device such as a scratching stick, a person with an itch in a hard-to-reach location must ask a second part to scratch the itch. This, in turn, requires orienting the second-party-scratcher by using a series of directions, which are often being misunderstood by the second party. For example, these instructions might include “Could you scratch lower? To the left…No, the other left. Now, down lower. To the right. No, no…Too far! Back to the left.” This situation may arise for people in normal health and dexterity or for people with limited flexibility, such as those having spinal injuries that prevent them from bending or twisting to any significant degree.

Thus, there is a need for an object that assists a person in precisely identifying a location on the person’s own body for a second party.