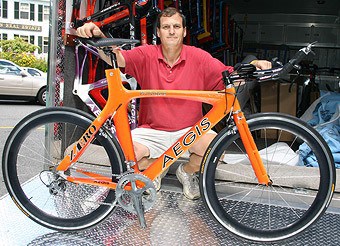 According to a story at CNNMoney.com, “Made in USA still matters.” Is, and will remain Aegis Bicycles’ motto, even if it ultimately becomes the death knell for the company, promised owner Pete Orne.

Orne bought the business in 2004 and like so many domestic businesses, it’s hanging on by a thread.

“The economy took us by surprise,” said Orne. “I had so much product sitting on the walls. Two years ago the money dried up. A year and a half ago, we started shutting down our manufacturing. It’s been a struggle to compete with the sizzle of cheaper Asian brands.”

The factory in Van Buren, Maine is currently mothballed. “It is ready to go if we can get financing again,” Orne said. Until then, he keeps the business alive online and through discounts. “I’m selling my inventory at almost 60% off,” he said.

Orne hopes to revive the brand. “It depends on the economy,” he said. One thing he vows — the business will remain in America.