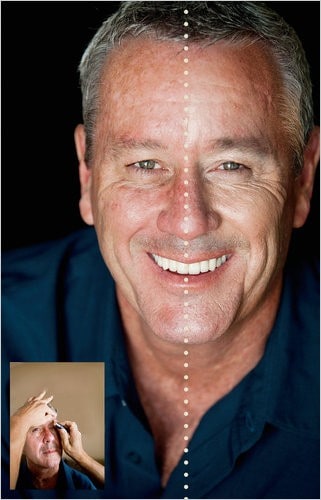 When cosmetics began disappearing from her bathroom drawer a few years ago, Gretchen Bain, who lives in Merchantville, N.J., knew the culprit.

It turned out that Mr. Bain, 34, a Customs and border-protection officer who is 6-foot-3 and weighs 240 pounds – and whose uniform includes a 9-millimeter handgun – had developed a fondness for his wife’s under-eye concealer, which hid his occasional dark circles. He was also swiping her face lotions and mud masks.

According to The New York Times, whether they admit it or not, more men are using cosmetics, judging from sales figures and the number of new products arriving on store shelves.

But please don’t call it “makeup” – cosmetics marketers pointedly steer clear of the term, which men tend to find emasculating. And the products men are using promise not to add color to masculine eyelids or stubbly cheeks, but rather to mask imperfections like razor burn and blemishes.

American consumers spent $4.8 billion on men’s grooming products in 2009, according to Euromonitor International, a market data firm. In 1997, the figure was half that – $2.4 billion.

Among the fastest growing men’s segments is skin care, which refers to nonshaving products like facial cleansers, moisturizers and exfoliants. That category grew more than fivefold over the period, to $217 million from $40.9 million, Euromonitor said.

While the data suggests more mirror time for men, it doesn’t give the full picture. By and large, men’s cosmetics are sold online by companies that fly under the radar of researchers.