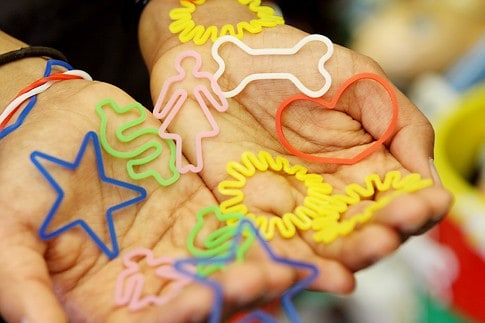 We first brought you the story of Silly Bandz, the rubber bracelets that are all the rage among grade-schoolers back in March. Now they’re getting grown-up treatment at bars and clubs.

Adults on the prowl are using the colorful bands instead of bad pickup lines to make love connections says the New York Daily News. “I had no idea what they were,” said financial planner James Santos, 32, who lives in Tribeca.

I went on a date with a girl. She gave me one. Two days later, another girl gave me another Silly Band. I felt important.”

Santos said he now keeps his own stock of the bands, shaped like palm trees and surfers, wrapped around his right arm.

“People always notice them,” Santos said. “They are a great conversation starter.”

Women who dole out the bands say it’s an easy way to hit on a guy without being too aggressive.