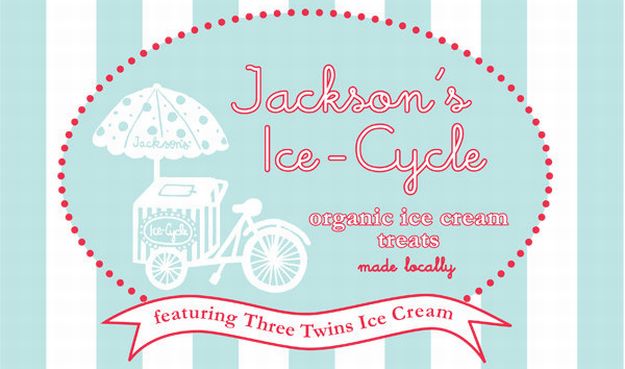 There’s no engine running when Jackson Poole loads up his ice-cycle to start on his organic ice cream route. Instead it’s all muscle power since his ice cream truck is made up of a bicycle/cooler reports the San Francisco Chronicle.

Poole settled on desserts after retiring from Japanese erasers sales, a business he’s had since second grade, and a product I had to Google to find out just what exactly it is (think erasers in the shapes of hamburgers, toothbrushes and everything in between).

Retired from eraser sales, he wanted to reinvest his earnings into a new venture, and dabbled with the idea of Hawaiian shaved ice until declaring it too expensive of a startup.

With the thought of wanting something, “more unique,”— and what’s more exceptional than a self-made 15-year-old pedaling icy organic treats through Marin –Poole went about finding a custom bike manufacturer, which he found in New York. “When the bike was shipped out and came off the palette I thought what the heck did I get myself into.”

He then had his graphic designer mom create a logo, succeeded in wading through the thick city permit process and found a restaurant to store his ice cream (storing the goods at home is against regulations he reminded me). With only a few weeks in business the teen has already accomplished sell-out days.

What’s he doing with his profits? Putting it back into the business and expanding, naturally.