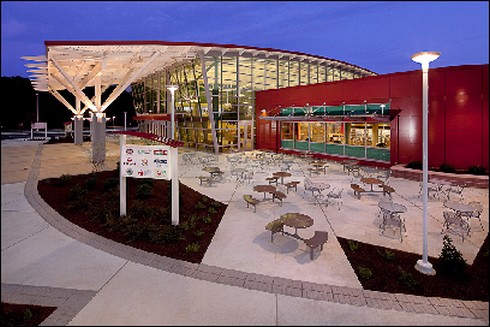 A 1956 federal law aimed at protecting restaurants and gas stations located just off the exits of a growing Interstate highway system.

The federal law bans the selling of food or fuel — or anything not sold from a vending machine — at rest areas on Interstates built after 1960.

By that time, states in the Northeast and parts of the Midwest had already built turnpikes and other major highways with commercialized rest stops, which were allowed to continue operating.”

This explains why rest stops in Delaware, Connecticut and Pennsylvania often include restaurants, gas stations and mini markets, but rest stops on interstates in Kentucky, Tennessee and other southern states usually have only picnic tables, restrooms and vending machines.

In fact, Poynter.org says, Delaware is making money from its rest stops while other states are closing theirs.

Not only did Delaware not spend a dime constructing what amounts to a $35 million mini-mall in the highway median. The rest stop actually makes Delaware money.

The state’s contract with HMSHost, a company that runs retail operations at many airports, gives Delaware a percentage of revenues from sales of gas, food and other goods — at least $1.6 million per year for 35 years.”

States like California, Oregon and Washington, which do not have commercialized rest stops, are turning to the U.S. Department of Transportation and their members of Congress to try to change the laws. So far, no luck. Fast food companies that spent a lot of money building restaurants at interchanges lobbied to protect the federal ban.

The Top 20 Marketing Ideas for Restaurants