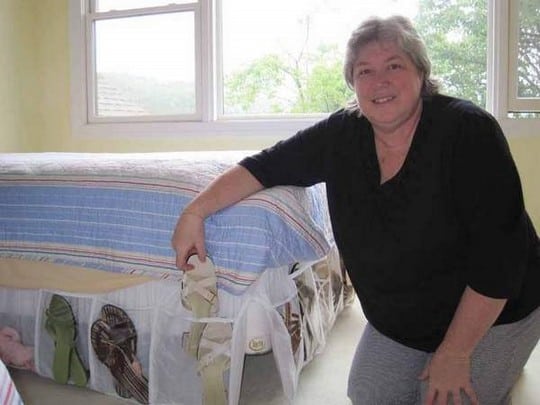 She lost a shoe in her closet, and while recuperating from energy-draining cancer treatments, the 51-year-old Hendersonville resident couldn’t bring herself to root through her closet to find it.

“It was just kind of a little exercise in trying to come up with an idea,” Tucker said. “I just kind of worked my way from the wall in the bathroom, and I suddenly got to the bed, and said, ‘You know, the space underneath the bed skirt, I wonder if it’s big enough to hold a shoe?’ ”

Alas, it was, and Tucker’s Shoe Skirt was born.

Two years later, her invention has been featured on the third season of “Everyday Edisons,” a national television show on PBS that doesn’t run in Henderson County but is available on Hulu.com. The show, which started airing in May, details the steps it takes for an idea to become a product on store shelves.

Here’s how her simple invention works: The shoe skirt hangs down from the mattress pad so the bulk of the heels of shoes actually go underneath the bed. It can comfortably store about 30 pairs of shoes, depending on the bed size.

The Shoe Skirt is now patented and Tucker signed a licensing agreement with the show. She and the show will make money if the product sells.

What’s New in Eyewear: A Look into the Future

Get Telematics Working for Your Fleet

Where Should You Invest Your Money in 2020?

Some Tips for Traveling Abroad for Business