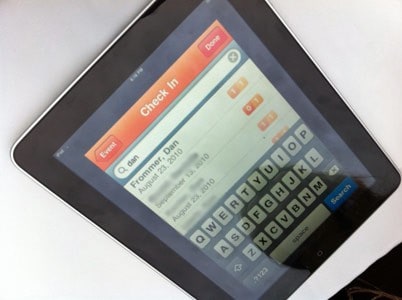 Apple’s iPad is a consumer device, first and foremost. But a few recent events have illustrated how the iPad could also potentially become an important device for business and enterprise users, as a lightweight, reliable, powerful — and most important, easily programmable — touchscreen tablet.

And that could be a big opportunity for Apple, reports Business Insider.

First, there’s the restaurant check-in and queuing system we saw getting tested in San Francisco last month at the 21st Amendment Brewery restaurant.

When you check in to the restaurant, the host puts your cellphone number into an iPad via an app called Tablewait. That information gets sent from the iPad into a server. This sends your phone a text message letting you know that you’re in the system. Then, when your table is ready, it sends you another text message telling you to come to the host stand for seating. And that’s it.

Second, we saw something similar in action — but even simpler — this week at a tech industry party held by NextNY at the Shake Shack in Madison Square Park.

At the check-in table, reps from Brew Media Relations were checking people in using an iPad and the Eventbrite app.

It was quick and waste-free, and probably saved printing and dealing with 50 sheets of paper. And now they have a digital list of who showed up to the party and who didn’t, synced to the Eventbrite servers (and other devices) in real-time. Imagine being an event organizer and knowing who has checked in from across the room.