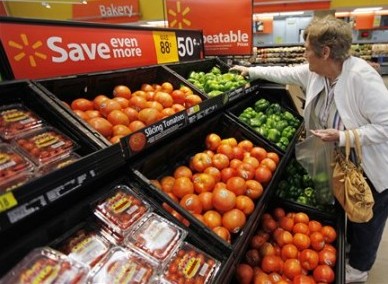 The Associated Press is reporting that Wal-Mart Stores plans to double its sales of locally sourced produce in the U.S. by the end of 2015.

The move by the world’s biggest retailer is part of a new sustainable agriculture strategy that looks to steer more business to small and medium-sized farmers globally while also reducing some of the negative environmental effects of farming.

If Wal-Mart meets its goals in the U.S., local produce will still make up only 9% of the produce it sells. But because of the retailer’s sheer scale, it has the potential for a sizable impact. More than half of Wal-Mart’s $405 billion is annual revenue is from food.

Wal-Mart plans to buy more of select U.S. crops. It also plans to train 1 million farmers and farm workers in emerging markets in crop selection, sustainable farming practices and other subjects and selling $1 billion in food sourced from 1 million small and medium-sized farmers.