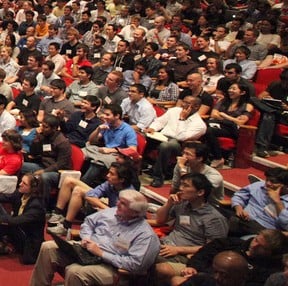 The annual Startup School, put on by the Business Association of Stanford Entrepreneurial Students and Y-Combinator, featured founders and investors in Dinkelspiel Auditorium. More than 800 prospective entrepreneurs attended reports The Stanford Daily.

The day’s list of speakers included Silicon Valley heavyweights such as Mark Zuckerberg, founder and CEO of Facebook, Reid Hoffman ‘89, founder of LinkedIn, and angel investor Ron Conway, who was one of the early investors in companies such as Google, PayPal, Facebook and Twitter.

The annual event is a collaboration between BASES, a student organization focused on entrepreneurship on campus, and Y-Combinator, a startup incubator that identifies promising startups and helps them succeed. In its sixth year, the event attracted young entrepreneurs, including approximately 200 current Stanford students and recent alumni.

“The key to success [in the Internet space] isn’t to be the first,” Andy Bechtolsheim, co-founder of Sun Microsystems said, using Google as an example. “It is who solved the right problem.”

Ron Conway spoke later, sharing his anecdotes of meeting the founders of Napster, Google, Facebook and Twitter for the first time. His behind-the-scene stories illustrated the evolution of each of these companies, and pointed out that even the founders themselves were surprised by their own incredulous success.

In an amusing moment of the day, a girl asked if it is possible to be too young to be an entrepreneur. Conway said no and asked how old is she. “Twelve,” she replied amid cheers and applause from the audience.