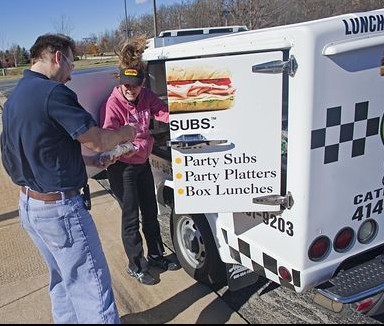 Some restaurant chains are now experiencing a different kind of foot traffic, according to The Wall Street Journal.

While the food truck trend has been around for a few years now, the article reports on the rise of recognizable restaurant chains using food trucks and vans to catch customers on-the-go.

“A small but growing number of chainsâ€š – such as Cousins Submarines Inc., Tasti D-Lite LLC and Toppers Pizza Inc.â€š – are following in the tire tracks of those local food-truck businesses popping up on city streets around the U.S.”

In cities like New York, though, vendor trucks are a hot commodity. Waiting lists for a license can have hopeful vendors waiting for at least 10 years.

And even though the trucks may not be a great source for profits, it’s a terrific marketing tool to draw attention to the brand. Despite earning only two percent of revenue from his truck, one Tasti D-lite van owner described it as his “roving billboard.”