It was estimated that Oprah gave away over $40,000 worth of gifts to each audience member in her two favorite things shows. My holiday gift suggestions don’t quiet reach that level, but they are much cooler!

“It’s a Jungle in There: Inspiring Lessons, Hard-Won Insights, and Other Acts of Entrepreneurial Daring” by Steven Schussler. 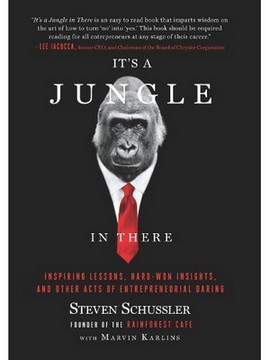 Steven Schussler let nothing stop him from getting to where he was planning to go. He wanted to have a restaurant with a tropical theme and he began by changing his home to resemble a tropical rainforest and he used it to show potential investors exactly what he wanted.

He succeeded and now he shares his secrets with us. He provides future businessmen with ideas as to how to channel their creativity and thus make their dreams come true. He even looks at low-budget deals and shows that they can work like the larger corporations. We are educated but we are also entertained by the way he writes. Here is the book that tells you what you need to know.

The gorilla on the cover wears a red tie, I wonder if that means he’s a Republican?