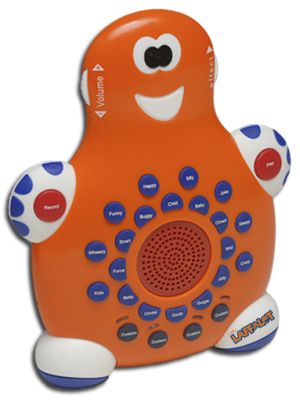 No one likes to be laughed at, but people do love to laugh. An inventor has created a toy that plays a variety of laughs, in hopes of bringing a smile to the face of sick children reports Daily Pilot. With every purchase, his business even gives $3 to The National Children’s Cancer Society.

Riding in an elevator with firefighter and Newport Beach inventor Steve Islava can be a load of laughs.

He doesn’t have to say a word. He just pushes a button on his latest creation, Laffy Laffalot, and the children’s toy plays one of 20 pre-recorded laughs that can make an elevator full of people smile and even chuckle. The device allows you to record your own message or laugh into the recorder and play it back later.

Like Santa Claus with a cart full of toys instead of a bag, Islava and his fellow firefighters from the Orange County Fire Authority stopped by the Children’s Hospital of Orange County on Tuesday and gave out about 300 Laffy Laffalots to kids.

“I’ve been a medic and firefighter over 20 years, and in our job, we’ve seen a lot of trauma and illness,” Islava said. “Bringing laughter is so important. It reduces stress for the whole family … laughter is the best medicine.”

In a situation where parents and hospital workers do what they can to keep spirits high, Islava’s invention was a simple, yet effective method. Just ask Angelica Sano.

Recovering from an operation last month where surgeons removed her right foot, it looked like Angelica was going to spend a good part of Tuesday recording things for her brother and listening to laughter. Her favorite was a baby’s laugh, she said.