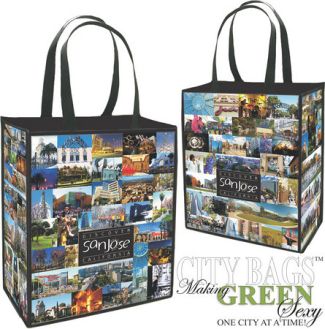 San Jose resident, Kymberli Weed Brady, has been taking photos of her lovely city for years. During that time she has easily collected upwards of 15,000 photos. Kymberli has decided to do something with them. According to MercuryNews.com, she is turning 100 of her photos into unique tote bags.

“It’s frustrating to look at postcards with none of the four downtown high-rises on them. Some of those postcards are from 1986, and none show what the city has to offer in the way of festivals, the harmony between old and new architecture, the people or the ambiance,” she says.

“We’re the 10th largest city in the United States and we’re the best kept secret.”

Brady had been making her own postcards by hand when she decided it was time to get serious with the launch of her photo agency business SanJoseStock.com.

However, postcards, notecards, key chains and mugs are on temporary hold while she concentrates on the launch of San Jose City Bags.

She would like to see restaurants do custom orders with their menu on one side or businesses do the same with custom images, then encourage customers to reuse the bags by offering discounts on their next visit or purchase.

She’s also in discussion with other cities and areas of Silicon Valley to produce similar bags for them as well.

The timing of the launch and the possible passing of a ban on plastic bags in San Jose is “a happy coincidence,” Brady says.